Daisy Ridley is Rey in ‘Star Wars: The Force Awakens’.

When it was first announced that Disney had bought Lucasfilm and begun production on another Star Wars movie, fans ran wild with speculation and questions. What happened to Luke Skywalker? Did Han and Leia get married? Was the Empire truly destroyed? The new movie, Star Wars: The Force Awakens, finally arrived on December 18 and put to rest many of those questions. However, there is one question the movie purposefully left unanswered, and it’s got the whole fanbase up in arms: Who is Rey?

In honor of the DVD and Blu-Ray release of the movie earlier this week, I decided to take a better look at that question. I have my own theories, of course, but before we get to those, let’s go through some of the possible explanations that have been brought up.

This is probably the most widespread theory at the moment, as the movie gives us plenty of clues that may or may not make this an obvious assumption. Rey is a character who, like Luke, is dumped on a desert land at a young age and is later thrust into the adventure of a lifetime when she feels the call of the Force. People who believe that Luke is Rey’s father generally assume that because Rey is so strong in the Force with so little training, there’s really no one else she could be other than the spawn of Skywalker. In addition to her unexplainable Force powers, we see she has a vision in the middle of the movie when she touches Luke Skywalker’s lightsaber which was lost in The Empire Strikes Back, signifying some sort of family connection. Fans of this theory would argue that Luke left Rey on Jakku around the time that Kylo Ren lost his marbles and turned to the dark side so that she would be safe from him. For more information on this theory, check out this exhaustive article from Den of Geek.

A relative of Obi-Wan Kenobi 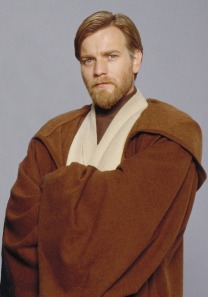 See the resemblance? No? Well…they’ve got the same accent.

I mean, she’s got the British accent, right? The evidence that supports this argument is more based around the themes of The Force Awakens than actual plot points, which I actually kind of admire. Proponents of this argument say that Rey could be a Kenobi because of how she discovered the Jedi mind trick. The first time we see Obi-Wan Kenobi use Force powers in the original trilogy was when he used a Jedi mind trick on a stormtrooper in Mos Eisley, which would make Rey’s discovery of the power much more relevant. There could also be significance in Rey’s vision, as Obi-Wan Kenobi is the only voice she hears audibly. In the vision, an older Obi-Wan calls out Rey’s name (which was managed by some brilliant sound editing) and Ewan McGregor’s Obi-Wan says, “These are your first steps.” The other bits of evidence, such as similar costumes, are purely symbolic, but are actually pretty interesting to think about from a filmmaking perspective. Check out a full list of evidence supporting the Obi-Wan theory from this article.

In my opinion, this one is much more of a long shot than the other theories, but it’s still worth mentioning. Throughout the movie, Han Solo shows a significant fondness for Rey, which some argue he wouldn’t have shown if she were just a random girl. He offers her a job working with him and he’s not nearly as standoffish to her as he is to Finn. In addition to this, there are a few editing choices that were made that could suggest the existence of a secret. In Maz Kanata’s castle, shortly after Finn resolves to go to the Outer Rim and Rey steps away to persuade him otherwise, Maz Kanata turns to Han Solo and asks, “Who’s the girl?” Immediately after she poses this question, the movie cuts away to a different shot.

And now, for my personal theory…

Her parents are nobodies/not the key to her mystery

For many of you, this might sound extremely far-fetched, but hang on and I’ll explain everything. This theory first came from a very personal belief and desire for the new trilogy. I don’t want the story of Star Wars to get to the point where you have to be apart of some “royal bloodline” to be powerful. Until the prequels came around, there was nothing that made Darth Vader super powerful other than his training. He was just a character who was really well developed. But other than this personal belief, I’ve seen the movie several times and I think this could be one of the best ways to establish Rey as a powerful character. Most of the evidence for the “Luke’s daughter” theory comes from the vision that Rey gets from Luke’s lightsaber. People would argue that Rey would never have had that vision if she wasn’t Luke’s daughter. While I do agree that that vision represents the Force calling out to Rey and pushing her towards Luke Skywalker, I believe it could mean something completely different.

I don’t believe Rey has that vision because she touches her father’s/grandfather’s lightsaber. She has it because she touches a Jedi artifact. People who are well-versed in the Star Wars universe know that the Jedi believed that certain artifacts had spiritual significance to them. This lightsaber has seen both the fall of the Jedi and the rise of the Empire and the Dark Side, so clearly it has some significance to it. In this vision, I believe the Force shows Rey key moments in history when the balance of power shifted significantly. The first thing that Rey sees in that vision is the corridor of Cloud City where Luke Skywalker met Darth Vader face to face to do battle for the first time. We can even hear Vader’s breathing in the background. That battle was the first time in 20+ years a Force user on the light side fought to pose a legitimate threat the to the dark side’s domination of the galaxy, which was a huge event in the history of the Force.

The Knights of Ren decimating the new Jedi is a huge shift in the Force.

Then, Rey saw Kylo Ren and the Knights of Ren strike down all the Jedi who were training with Luke. We also get a shot of Luke himself as he parts ways with R2-D2 after Ren’s turn. This was a huge moment for the Force because like the rise of Vader before him, it signified a new rise to the dark side, led by Kylo Ren, and possibly by the Knights of Ren as well. After this, Rey is shown a blast from the future, as she sees Kylo Ren ignite his lightsaber in the snowy forests of Starkiller Base. Knowing how that confrontation ends, we can safely say that it is the definitive moment in the movie where the Force “awakens” within Rey, bringing the light side to challenge the dark side again in battle for the first time in ages.

If you’re still with me, then you may be thinking I’m cherrypicking evidence here because I’m forgetting about the scene where Rey is dropped off on Jakku. However, if my theory is even close to true, then this scene would also represent a huge shift in the Force.What if Rey was affiliated in some way with Luke Skywalker and the Jedi before arriving on Jakku? Perhaps she was training with him, or preparing to be trained. What if someone, whether it be Luke or her parents, hid Rey on Jakku when Kylo Ren turned in order to protect here? That would certainly fit in line with the themes of storyline’s passed. It would be an interesting way to connect Rey and Luke’s origins without actually making them blood relatives. If this was the case, then it would fit in perfectly with the idea behind the rest of the vision. When we leave Rey at the end of The Force Awakens, she stands at the center of the light side’s awakening. So if the Force is truly trying to show her shifts in the balance of power throughout history, then by showing her being left on Jakku, the Force is displaying how the promise and experience of someone with great power were closed off for good, killing any hope of having a Force user challenge Kylo Ren.

Questions and debates will rage on as to who Rey might be, but no one will know anything for sure until Star Wars Episode 8 hits theaters in 2018…or will we have to wait until Episode 9?